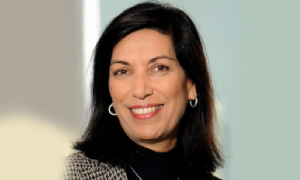 Huda Zoghbi, M.D., is Distinguished Service Professor of Pediatrics, Molecular and Human Genetics, Neurology, and Neuroscience at Baylor College of Medicine, an Investigator with the Howard Hughes Medical Institute, and founding Director of the Jan and Dan Duncan Neurological Research Institute at Texas Children’s Hospital.

Dr. Zoghbi graduated with distinction from the American University of Beirut (AUB). She attended AUB’s medical school for one year, but due to the civil war, she moved to the U.S. and received her medical degree from Meharry Medical College. She joined Baylor College of Medicine for her residency and subsequently obtained additional training in molecular genetics.

Dr. Zoghbi’s expertise ranges from neurodevelopment to neurodegeneration. She and Dr. Harry Orr discovered that Spinocerebellar Ataxia type 1 is caused by expansion of a polyglutamine tract. Her subsequent studies demonstrating that such expansion leads to accumulation of the mutant protein in neurons has had profound ramifications since many late-onset neurological disorders involve similar accumulations of disease-driving proteins. Her work in neurodevelopment led to the discovery of the gene Math1/Atoh1 and showed that it governs the development of several components of the proprioceptive, balance, hearing, vestibular, and breathing pathways. She also discovered that mutations in MECP2 cause the postnatal neurological disorder Rett syndrome and revealed the importance of this gene for various neuropsychiatric features.

Dr. Zoghbi has trained over 100 scientists and physician-scientists including several BRASS scholars. Dr. Zoghbi’s dedication and commitment to Baylor’s mission is palpable. She has been committed to educating the next generation of scientists and to creating collaborative opportunities. She is a member of multiple professional organizations and boards. She has been elected to the National Academy of Medicine, the National Academy of Sciences, and the American Academy of Arts and Sciences. Dr. Zoghbi’s honors include the Pearl Meister Greengard Prize from Rockefeller University; the Shaw Prize in Life Science and Medicine; the Breakthrough Prize in Life Sciences; the Canada Gairdner International Prize; the Victor A. McKusick Leadership Award from the American Society of Human Genetics; the Citation Laureate by Web of Science; and the Lundbeck Foundation’s 2020 Brain Prize. She has honorary degrees from Harvard University, the University of Massachusetts, and Yale University.