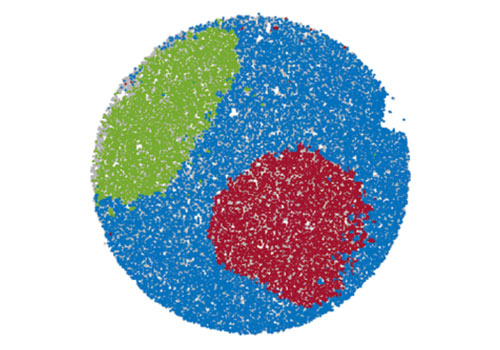 Within complex tissues such as cancer tumors, individual cells can vary widely from each other. Internally, cancer cells can develop unique DNA mutations and genomic changes, potentially leading to drug resistance, metastasis, or relapse. Externally, the cells’ specific locations within the tissue also matter, since the local structure of a tumor and its surrounding tissues can affect cell state and drug permeability.

To measure both genetic and local factors at the same time, researchers from Harvard University’s Department of Stem Cell and Regenerative Biology (HSCRB) and the Broad Institute of MIT and Harvard developed a new technique of spatially-resolved DNA sequencing, called slide-DNA-seq. When further combined with spatially-resolved gene expression analysis, the technology gives researchers a better understanding of cancer progression and potential treatment.

The researchers’ findings are published in the journal Nature.

Slide-DNA-seq analyzes slices of intact tissue, in which each cell remains in its original location — as opposed to conventional sequencing techniques, where cells are dissociated before DNA extraction. The researchers used microbeads, each tagged with a unique spatial barcode and bound to specially-prepared glass slides, to capture DNA from the tissue.

"Each bead is about the size of a cell," said co-corresponding author Fei Chen, who is an assistant professor in HSCRB and a core institute member at the Broad Institute. "Together, they are like individual pixels on a camera which takes snapshots of genomic alterations within each cell in the tissue."

After measuring genomic changes, the researchers applied a related RNA-based Slide-seq method Chen and collaborators developed in 2019, which used gene expression profiles to identify and map the locations of cell types and subtypes within a tissue slice.

"We can use the same barcoded beads to capture the transcriptome from each cell, and combine these two measurements into a multi-modal image," Chen said. In other words, the researchers can see changes in both the cells’ DNA and gene expression within the context of tissues.

The researchers applied the technique to a mouse model of metastatic cancer, as well as a primary tumor sample from a patient with colorectal cancer. In each tissue, the researchers were able to identify subpopulations of cancer cells in distinct regions, corresponding with unique genomic evolutionary paths and gene expression states.

"We applied this to DNA sequencing and cancer, which are hugely important areas of medical research," said co-corresponding author Jason Buenrostro, who is a HSCRB assistant professor, an associate member of the Broad Institute, and co-director of the Broad's Gene Regulation Observatory. "However, the technology also opens the door to more broadly measuring DNA molecules within tissues. As such, we imagine future approaches will use this work as a foundation to build tools that measure modifications to DNA as well, such as the epigenome."

Adapted from a story originally published by the Harvard University Department of Stem Cell and Regenerative Biology.